From the last part of my trip, in Prague. I had such a great experience with the tour guide in Bratislava that I did the same thing in Prague. This time I was able to …

Today I hired a private tour guide in Bratislava and her personal story was as interesting as the sights she showed. Eva is a couple years younger than I am and has lived in Slovakia, …

I know it’s better to just post the fun stuff, but I feel the need to confess (it must be all those Catholic churches I’ve visited this past week). I am not an intrepid traveler …

(originally written March 14) I think Budapest is even more lovely by night than by day. I have made it a daily ritual to stay on the Pest side sightseeing until after it becomes dark. …

I am here on Castle Hill on the Buda side of the Danube in Budapest, Hungary.

The castle is a huge, monstrous-sized set of buildings housing a couple museums, with regal sculptures and broad sweeping terraces high above the river offering views over all of the Pest side. I read that it may seem incongruous to have such large buildings and monuments in the capital of a relatively small country, but that in the past it was the capital city of a much larger region. It’s as if Washington DC, with the Lincoln Memorial, Jefferson Memorial, Washington Monument, and so on, was the capital of a country the size of just Virginia, Maryland and Delaware. 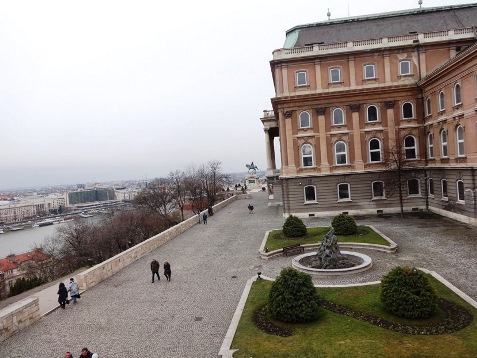 Everyone here speaks English, even “locals” (by that I mean non-Americans). It turns out there are so many countries each with their own language that others don’t speak – the Hungarians don’t understand Slovak, the Slovakians don’t understand German, and so on, so the one common language most everyone knows is English. However, I do stand out with my lazy American accent.  There was a group of young students in the cafe yesterday all speaking English with varying accents, and one of them was describing the use of the term “whatever” in America. Then he said it with an American accent, and sounded exactly like any exasperated American teenager – totally nailed it.

On my way to the Hungarian National Gallery in the castle yesterday, I walked by Sandor Palace, which turns out to be where the President of Hungary lives and works. It happens to be white, so they jokingly refer to it as the White House. I walked right in front of it, as if I were walking down my own neighborhood street. There were two sentries at each door, but that was it. No snipers on the roof (that I saw), no hordes of police. I wondered how close I would have to get for the sentries to make any movement, but I am not a complete idiot and so did not test that. 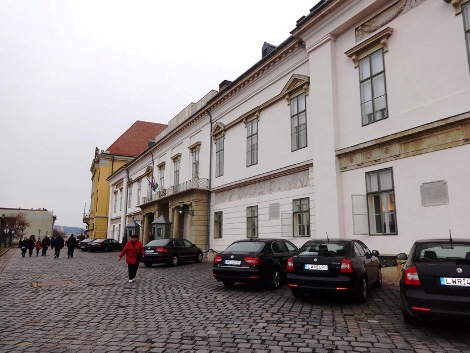